Studying the Bible is unlike studying any other text, at least in my opinion. At first, it is exactly like studying any other written material. You discover the facts, determine the setting, identify the main characters, etc. Next you see spiritual lessons, truths and applications for Christians in general, the church as a whole and these are valuable and worth taking note of. But, then, there is a third dimension, one might call it, where you are reminded clearly that there is more for the person who is willing to be taught. If we will look carefully and listen intently, the Holy Spirit will make it personal. It is one of the remarkable results of sincere Scripture Study. Suddenly, this is not just a story about something or someone from long ago. This is not just a lesson for everyone. It is PERSONAL and your own spirit is quickened by the Spirit of God.

I know this to be the case because I have experienced it myself. Although I could try my best it would be difficult to explain fully what happens during that moment when you realize God is speaking to you, directly to you, from within the pages of ancient manuscripts. It is glorious. It is life changing.

Consider that as we consider Hannah, a well known woman in the Old Testament. Hannah’s story is told in the Bible in I Samuel chapters 1&2. For the first decade of my marriage I became fast friends with several Biblical Women and Hannah was one of them. I could relate to her. I took comfort from and was given hope by her story. She and I had a few things in common, after all.

So, what do we know about Hannah?
*She lived in the latter part of the period of the judges before there was a king in Israel.
*She was a woman of prayer.
*She was a barren woman.
*She was in a place of desperation.
*She was greatly loved by her husband
*She was taunted by other women.
*She was falsely accused, misjudged.
*She became the mother of Samuel, one of the greatest prophets and priests in Israel’s history.
*She kept her vow that she had made to God, so she was faithful and courageous.
*She wrote a beautiful prophetic poem/song that many believe that Mary, the mother of Jesus used as a pattern for her own Magnificat found in Luke 1.
*She is still inspiring and influencing people, just like me, today.

Now, she is isn’t the only woman in this story. So, what do you know about Peninah? Well, we know, wait…. Who? Chances are, that is exactly your response. Let me tell you what is known. Peninah was the other wife, she had everything that Hannah wanted so desperately and she took great joy in pointing that out. She had Hannah’s husband and she had been able to give him children. The full impact of this statement is lost on us in modern times. This was huge. This changed everything. This determined the future. And lastly, we know that Peninah was one of those women who knew how to use her mouth and her words to hurt and belittle a wounded and struggling soul.

Here’s the first ‘make it personal’ point I want to make. I’ll tell you just as plainly as I told my own children when we studied this passage together as a family. If you haven’t already encountered a Peninah, you will. You can count on it. The day will come when you will find yourself discouraged and disappointed and perhaps confused. You will find yourself in a season of waiting and praying and hoping for things to change. Right at the most vulnerable and painful time of your life when what you really need is an encouraging word, you will find yourself facing a Peninah. I want you to remember this lesson and that day remind yourself that Peninah is remembered for her poisonous words if remembered at all. It is Hannah that we recall and Hannah that made a lasting impact on the world around her. When that day comes just look them right in the eyes and say, “Peninah who?”

As we are introduced to Hannah in 1 Samuel chapter 1 we can get a good understanding of her and her struggle. We see that her husband loved her but, although he did his best to comfort her, he simply wasn’t enough. There are those times when no other human, no matter how much they care, can lift the heaviness on our hearts. We see that she knew where to go and who to ask for help. She went to the temple and prayed to God. Scripture tells us that she was in deep anguish and wept bitterly as she poured herself out before God. She was so grieved that ‘there were no words’ and although her lips moved, no sound was heard. Have you ever been there? Have you ever experienced pain that was so deep, so unfathomable, so overwhelming, that ‘there were no words’? Have you ever felt so desperate for things to change, for relief, for an intervention and an interruption in what seemed like a living nightmare that you couldn’t even bring yourself to say it out loud? If so, then you understand how Hannah felt.

If you’ve read her story, and I hope you have taken a moment to do so, you know how the rest goes. She has her encounter with God. She leaves that moment different than she came. She gets up, no longer downcast and gets something to eat (which she had not been able to do) and returns home. Here’s another personal point to take note of. What had changed? Was she suddenly with child? Did a baby magically appear in her arms? Did Peninah’s taunting cease? No, the circumstances had not changed. It was Hannah herself who had changed. Her perspective, her outlook, her attitude had been adjusted.

One translation says that in DUE TIME Hannah was given what she prayed for, the gift of a baby boy. If you only remember one thing of the many things I am writing today, remember those two powerful, potent, pivotal words DUE TIME. No matter what you are facing today, no matter where you find yourself tomorrow, DUE TIME is going to come. There is an appointed time when you will be on the other side of what seems like a impossible situation. I waited over a decade to see my due time when my aching empty arms were filled when we adopted for the first time. Don’t give up, don’t despair, DUE TIME is ahead.

Just when we think we’ve arrived at a happy ending in this story, Hannah now must draw on every ounce of strength and courage and fortitude within her to do whatshe promised she would do. She is going to give back to God whatHe gave to her. There is not one of us who would pretend for a moment that whatshe would do was easy or simple or painless. She had vowed to do what every mother eventually must do, release her child into God’s care. We all hope that day will be later rather than sooner and the result of a natural growth into adult independence. But, we are all fully aware that is not always going to be the case.

Exactly how old Samuel was when Hannah presented him to Eli at the temple is debatable. We do know that she kept him until he was weaned and took him when she felt he was ready. And here’s the other thing that we know. When she kept her vow and returned Samuel to God, she did so with a song of praise. Her poetic words are recorded in 2 Samuel and as I mentioned before, are believed by many to be the pattern for Mary’s Song. Hannah no longer found herself at a place where there ‘were no words’. The Lord had given her a song and the words flowed. That song came not when she had that initial life changing encounter, not when DUE TIME had arrived and she held her answer to prayer in her arms. Her song of praise flowed from her inner most being, a powerful prophesy when she gave back to God what He had given to her.

This is the question we must all ask ourselves. What will our song sound like? Who will we pattern ourselves after? Which words will we choose when facing difficult times? How will we respond? I pray that like Hannah, we will impact those around us With a song of praise, words of encouragement, a response of hope. 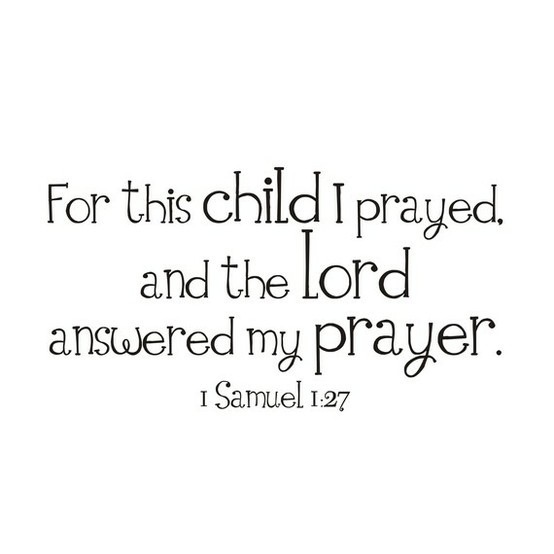